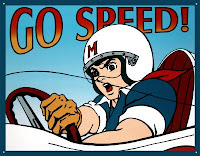 Speed Racer is a great movie.

The first trailer was one of the worst things I'd ever seen, and it left me completely unenthusiastic. The reviews were worse; I glanced at them on Thursday -- Speed Racer is at 35% on Rotten Tomatoes -- and decided against taking my sons to the movie except at a matinee. (They still have matinees in Los Angeles, though it's usually the very first showing and it's still $6.)

So Sunday morning we got up early, picked up my 12 year old's best friend, a great kid, left my wife to sleep in, and drove down to one of the few theaters I know of that does matinees for cheap ...

And had a blast. This is the movie you'd have made at 12, if you were an astonishing genius and had an unlimited budget. The casting is brilliant -- top to bottom. John Goodman as Pops Racer sold me. Susan Sarandon may have been slumming, but damn, the woman picked the right movie to slum in. Christina Ricci is a perfect Trixie, and the kid playing Spridle (Speed's younger brother) -- was a hoot. Even the monkey had chops.

The core of the movie is the relationship between Racer X (formerly Rex Racer, Speed's older brother, nicely underplayed by Matthew Fox), Pops, and Speed Racer, played with impressive sincerity by Emile Hirsch. If you watched the cartoon, you know the backstory -- Rex Racer and Pops have a falling out, Rex leaves Racer Motors to go on his own ... and then "dies" in a staged accident. He re-emerges years later as "Racer X," a dark and mysterious good guy with an inexplicable soft spot for Speed. The movie's plot doesn't make any more sense than the plots did in the cartoon, and it's fine; it's all an excuse to stage races (and they're great races) where Speed races and beats the bad guys.

They play it straight. That's the core; that's the thing I was most afraid of going to see this. There are plenty of jokes, most of them genuinely funny; the action scenes are hyperkinetic but reasonably coherent for being completely digital; and the high drama of Speed vs. the Bad Guys is played well enough that it doesn't get in the way. But they don't betray the core of the story. The mistakes Pops Racer made with Speed's older brother (and which Rex made with the old man) -- leave scars on everyone concerned. Pops walks around with the ghost of his dead son in every scene; there's a touching moment toward the end when a government agent asks Racer X if he thinks he made a mistake, leading his family to believe he was dead. Matthew Fox shrugs and gives it a moment's thought: "If I did, it's a mistake I'm going to have to live with." Which is the last we see of him, in this movie ...

When Pops and Speed come to the same moment, when the rebellious younger son asserts his own manhood -- John Goodman sells it; he's learned better, learned to control his own pride and anger: and he doesn't make the mistakes with Speed that he made with Rex. Speed is the boy who gets to make good, who gets the love of his father, the love of his girl, and the chance to be the greatest race car driver in the entire world.

Just one wink to the audience, one moment of "yeah, we know how corny this is" -- would have ruined this movie. The Wachowski Brothers don't give us that wink.

This is a great movie. Not "great for the kids," not "great for the boys," not "great for your inner twelve year old" -- great. It's brave and -- sadly -- like two more of my favorite movies, Rustler's Rhapsody and Knightriders -- doesn't look to be making a lot of money. Go see it in theaters while you still can. Ignore the critics. They don't know what they saw and they're wrong.
Posted by Daniel Keys Moran at 12:15 AM

Words cannot adequately express how much I agree with you. Movie Reviewers despise kinetic films, and this one may be the most kinetic film I have ever seen.

Thanks for the review -- I concur. I took my 20-yo and his best friend, guys who have been friends for 15 years, you know? We know each other inside out. We all loved this movie. We saw it at midnight, I think some portion of the audience was chemically enhanced, and a couple walked out, but there was cheering and clapping at the end.

The many redemption stories in SR drive the movie as much as the car races make it sparkle. That's where the real heart is.

Hey critics, since when is "a movie for boys" a bad thing? A PG movie that cost $110MM? Why can't we have more of those? Oh, I know -- the reviews slap them down before they can get rolling.

Let's hope for the long tail on this one.

MEH, its a movie about a cartoon that I know absolutly nothing about. The Advertisements I've been exposed to give me no reason to go see it. It's a niche movie that should have gone directly to dvd.

m'Lady wife and I went and had fun. I'm directing people to your review as a way to try to get them to see the movie too.

The Wachowski bros certainly put a lot of effort into making Speed Racer... the movie overall looked and felt like a cross between anime, a kaleidoscope, that Flintstones movie, a video game and the Dukes of Hazard

If I needed to boil a review of Speed Racer down to two words, they'd be "Unmitigated audacity."

I can recalled being repelled by the movie's trailer a few months ago. At first I was determined not to see SPEED RACER. But recalling that I used to be a fan of the old 60s cartoon, I changed my mind and went to see it.

Needless to say, I really enjoyed it, much to my surprise. I hope to see it again.

Do you actually mean that I'm not the only person on the planet who liked Rustler's Rhapsody? Thanks for the ammo on Speed Racer - I might be able to get someone to accompany me to it after they read your blogspot. Regards, Paul

I never saw the cartoon.

And yes, it's a -fantastic- movie. We commented on the lack of undercutting humor (so rare in modern works) as well, and it's important.

I was 3 when the series first aired, but I watched it in reruns at 7 or 8, and I was in love with it--not the characters, not the stories, but the cars, the races, the sounds... I was the kid in the classroom drawing pictures of race cars at every opportunity for a good chunk of the next decade.

So when I first saw the trailer for this movie, and later snippets of it on TV--never the whole thing--I was left cold. Snippets were not enough to pick up on the story line, and the movies simply doesn't honor the automobiles they way they should be.

But I just saw the whole thing for the first time, largely on your recommendation elsewhere, DKM, and I have to admit, it's a very good story with some very good actors. I did not give it a fair shake the first time around, and I missed the boat. I'm glad I finally caught up with it.

However, it could have been much better if they'd left the hyperkinetic video-game graphics in the consoles. Ronin, Bourne, James Bond...all of those have vastly better race scenes. I have no beef with adding a bit of extra oomph from CGI, but this was ridiculous. I hope someday there will be a remake with as much attention paid to the automobiles and the love of gritty road-racing as the original series inspired.

Still, a great flick. Thanks.