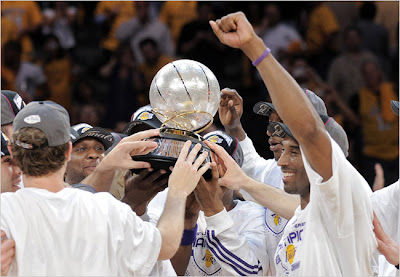 Tonight the Lakers beat the defending NBA champions to advance to the Finals.

In their sixty years in existence, the Lakers have gone to the Finals 29 times. This is a record of excellence unrivaled in any professional sport. Off the top of my head I can think of only two franchises that compare --

Now, the Celtics have won 16 of their 19 appearances; the Lakers have only won 14 of their 28, so credit to the Celtics there. Oh, and speaking of the Celtics --

Fuck Johnny Most. Fuck the color green. If I owned a green shirt I'd burn it but I don't own a green shirt because I fucking don't wear green clothes. No offense to the Irish, sincerely since I'm related to some of those bastards, but fuck the Irish and fuck St. Patty's Day for allowing the Celtics to associate with it.

Yes, and I say this with sincere, mature reflection: Fuck Boston.

They do need to win one more game against the Pistons to advance. So, I'm rooting for you guys. Get it done.

I'm ready for the Finals now.
Posted by Daniel Keys Moran at 11:38 PM

In your post, you seem to exhibit mixed feelings regarding Boston and the Celtics. Could you clarify how exactly you feel about that?

Belated thanks for the AI War snippet; it was delightful.

What do you mean, mixed feelings? He obviously feels a very strong sexual attraction to them.

Ah sorry, I see it now - I can see how someone could misconstrue the "smite them" as a negative statement. I took it as a euphemism.

That reminds me, I'm going to be in Boston twice in June. Business mid-month and then visiting friends the weekend after. I dislike the place for reasons that have nothing to do with the teams involved.

As a Boston resident of Irish heritage who is at least a fairweather Celtics fan (though I really back the Blazers since I grew up in Oregon), please allow me to say that that was one of the best rants I have ever seen. Holy well done Batman.

This morning Logo was on the Dan Patrick show. At one point he said -- mild paraphrase here, I was driving and didn't write it down:

"I still wake up at night from bad dreams. Seeing green." The Dan Patrick website will have it up as an MP3 later today -- give it a listen. Jerry West is one of the finest human beings ever to wear a Lakers jersey -- and the line about bad dreams isn't played for laughs, he was dead serious.

In 2000 when the Lakers were playing the Portland Trailblazers, Amy and I were out driving around listening to the game on the radio. I was too stressed out to watch the game, so we drove and listened until the Lakers pulled it out....

The next morning, I read in the newspaper that Jerry West had spent the night driving around listening to the game, too stressed to attend it in person.

Later on Dan Patrick, in a nice piece of synchronicity, asks Logo if he'd d wear a green shirt -- West says he's pretty sure he doesn't own a green piece of clothing.

This morning, in an even nicer piece of synchronicity, my six year old told me he was supposed to wear a green shirt to school today, something about it being springtime and garden colors. I'm a good Dad, I didn't give him the Celtics rant -- we just went and looked in his and his older brother's closets. The closest we could find was one of his older brother's shirts that was a vaguely olive color. This satisfied Connor, satisfied me, and fuck the Celtics.

I've had 3 hours sleep. Couldn't get to bed until 4 AM last night.

Nothing personal, honest. I genuinely dislike Danny Ainge, but there aren't 3 better guys in basketball than Bill Russell, Larry Bird, and Kevin Garnett. I'm glad to see local boy Paul Pierce doing well -- though I hate how he's going to play in Los Angeles. Family and friends watching and cheering -- Lakers may have home court advantage on the Celtics for 3 games, but Paul Pierce will have home court advantage up to 7 times in this series ...

Assuming the Celtics get by the Pistons. Go Celtics!

Well. I guess I know which team I need to root for in the finals.

:-) I never take sports rivalries personally. They're the lion's share of the reason that sports exist in their current media-driven form in the first place! Of course that doesn't make me not want to punch Ohio State football fans in the teeth now and then, smug bastards that they are, but to my credit I have so far managed to refrain from actually doing so.

Dan, you actually satisfied me with your previous explanation of the difference between sports hatred and normal everyday hatred. So, no worries. I live in Denver now. Ironic, since Boston is evidently The Center Of Evil In The Known Universe, yet, Denver is Hell. Hmmm. I guess it's good I'm moving to Philly. Anyway, have you ever thought of somehow working the demise of Boston into your fiction? I always thought you were harsh on Lower Manhattan and Yorktown. Boston is important to colonial history, perhaps you could have the Johnny Rebs make a stand there or something and blow it up. It might be cathartic.

The amazing thing is for someone who hates the Celtics so much, you're knowledge of Celtics history is impeccable. I'd wager that at least half the people at the Gahden tonight (yes, I'm breaking out my Boston accent for the occasion) don't know who Johnny Most is.

Anyway, in the interest of equal time:

I thought about writing a history of professional basketball once, starting with the peach basket and James Naismith and "Pop" Stebbins -- the guy who actually nailed the peach baskets up.

The first ever actual game of basketball ended 1-0. It was nearly indistinguishable from watching soccer, I'm guessing. When a basket was made, Pop Stebbins had to climb up a ladder to retrieve the ball ...

Man, I love that name.

I did have to look up the retired Boston numbers. The rest I wrote out of my head. I hate the Celtics, because they're a false Prophet, "Death to the Celtics!" ... but I do know a lot about them. I've read biographies of both Larry Bird and Bill Russell.

Blowing up Boston has some attractions. It's never occurred to me: "Ceterum censeo Bostoninem esse delendam!"

Has a ring to it. I may need to update the logo on this blog:

Well. Never let it be said that you Hollywood types don't write some pretty prose. It's a pleasure to read such eloquent hatred of my team, and I'm completely sincere in that. You show us our due. Thank you.

But me, I'm from Boston, born and bred. So let me demonstrate how we say it around here.

Thanks Dan. That was too entertaining. I laugh each time I read it and because I was so impressed I have read it out load to both my wife and brother.

Boston's a very nice walking city. But it has even crazier drivers than LA, so it all evens out.

There's probably some kind of deep karmic relationship between the twin nightmare cities of vehicular travel. Of course, this would mean that someday Boston and LA are destined to team up against Rome and Milan....