An irregular blog feature inspired by our soon-to-be ex-President, and not a moment too soon ...

"It turns out that there's a lot of interlinks through the financial system." -- George W. Bush, September 21, 2008

... that the Southern Strategy of marketing racism in code words, which worked brilliantly for two generations, is broken. Two generation ago a substantial part of this country really was racist, but the racists have been dying out. What's left is a country that's less white than it used to be and rather more white than it's going to be -- the Census Bureau estimates the non-Hispanic white population of the United States at 46% by 2050. Hispanics will be 30% of the population, blacks 15%, and Asians 9%. A few years back there were about 10,000 elected black officials in this country: 50 of them were Republican; one half of one percent.

Republicans will adapt: they have to. They'll find a way to market themselves to non-white audiences, they'll shed the (relatively few, any more) genuine racists among their ranks, and they'll become competitive again -- or they'll cease to exist and a new party will come into existence. Politics abhors a vacuum.

... that people under 30 voted for Obama by 3:1. This is the period when voting patterns are set -- which is good news for Democrats and more in a long string of bad news for Republicans.

"It is my belief that our party has lost a generation of young voters." -- Ohio GOP Chairman Kevin DeWine

... that George W. Bush was the Herbert Hoover of our era. (Well, worse; Herbert Hoover merely presided over an economic disaster. But economically, he's the first President to approach the Hooverian ballpark ...)

It remains to be seen if Barrack Obama is FDR.

The Dow Jones Industrial Average, when George Bush took office, was 10,587. As of today it's below 8,000 -- about where it was in 1997. If this were an unfortunate coincidence, well, that'd be one thing, but it's not. Ever since the end of the Great Depression, the stock market has done better during Democratic administrations than during Republican administrations.

"Looking at the 72-year period between 1927 and 1999, the study shows that a broad stock index, similar to the S&P 500, returned approximately 11 percent more a year on average under a Democratic president versus safer, three-month Treasurys. By comparison, the index only returned 2 percent more a year versus the T-bills when Republicans were in office."

Worth a click-through -- but note that the study cited was performed in 2004, before the greatest economic crisis of the last 80 years hit.

... that Senate Democrats will welcome back into their caucus, and into their leadership, a man who vigorously campaigned against their Presidential candidate, and who campaigned against other members of their caucus, if he really really wants to keep his job. "Whores" and "cowards" are two words that spring to mind, but neither one quite fits. I'll keep working at it.

I understand why people vote Republican. I do -- I don't agree with it, not lately, but the core of pure yellow at the heart of the Democratic establishment has to be heartening to America's enemies. Republicans may be crazed, but you'd have to hunt to find a group as gutless as the ones Democrats have elected to leadership positions in the House and Senate.

... that Quantum of Solace is a good movie, but not a very good movie. It's not as good as Casino Royale, though it's better if you watch Casino Royale again before viewing it -- I did. 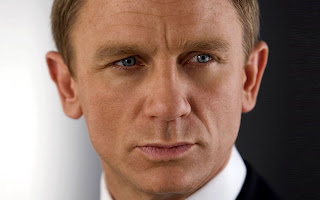 I will say that this is my favorite Bond, surpassing even Sean Connery. Heresy, I know, but ranking Bonds on a scale of 1 to 10, with 10 being best ....

Daniel Craig is the best actor to play Bond, by quite a margin. (Connery became a very good actor in later years -- but not when the series started. The Connery of Untouchables is not the Connery of Dr. No.)

Craig's Bond is a blue-eyed sociopath, a man who kills when it's convenient and without remorse or much in the way of affect. Quantum is a lousy Bond movie; Bond movies are Western kabuki, highly formalized, and Quantum ignores most of the formalities. We don't get the right music, we don't get the "Bond, James Bond," we don't get the gadgets, we don't even get "shaken, not stirred" -- Miss Moneypenney is gone, and so is Q. And I don't care much. We get a man struggling to hang onto the shreds of his humanity, and I'm there. I'm willing to wait and watch this Bond evolve toward the more elegant Bond of the Connery/Brosnan mold.

He certainly does look good in a tuxedo.

... that HDTV is not an unalloyed blessing. I had clear memories of Ursula Andress coming out of the showers naked in Dr. No -- I saw a 1080P copy of the movie recently, and in fact she's wearing a flesh-colored one-piece. 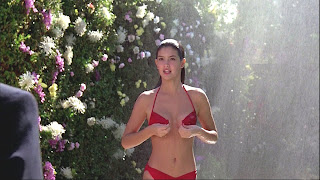 (Still ... Phoebe Cates in "Fast Times at Ridgemont High" justifies HDTV pretty much all by herself. I am not really open to discussion on this point.) 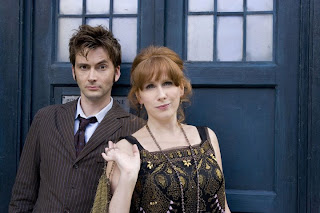 ... that David Tennant is leaving Doctor Who after the 2009 season. I haven't written about Doctor Who on this blog before -- I just discovered the relaunched Who in the last year, and as with Battlestar Galactica, went through it in a couple dozen sessions -- and it's brilliant, a show that all by itself has defined a Golden Age of science fiction.

I've also watched Torchwood, the spinoff series, and while it's OK (and pretty gay), it's not up to the standards of invention of the Eccleston (one season) and Tennant (four seasons so far) Doctor Who. The current Doctor is the last survivor of the Time War, a strikingly lonely man or alien or whatever he is, who's out to have fun and do the right thing. There's the suggestion that he killed millions in the Time War, destroying the race of the Time Lords and their Dalek enemies in that conflict -- but we're never shown the war, just the aftermath (a good decision, that)..., in which an immortal man, the last of his kind, keeps his head up and keeps swinging away at what the universe throws at him.

There are iconic moments -- in particular the ending of "The Family of Blood," which has a downright epic conclusion to the tale of evil, short-lived aliens who want to live forever, running head-on into the last of the Time Lords ...

He never raised his voice, that was the worst thing. The fury of the Time Lord.

And then we discovered why, why this Doctor who had fought with gods and demons, why he had run away from us and hidden.

He was being kind.

He wrapped my father in unbreakable chains forged in the heart of a dwarf star.

He tricked my mother into the event horizon of a collapsing galaxy to be imprisoned there forever.

He still visits my sister once a year, every year. I wonder if one day he might forgive her but there she is, can you see? He trapped her inside a mirror ... every mirror. If ever you look at your reflection and see something move behind you just for a second, that’s her. That’s always her.

As for me, I was suspended in time and the Doctor put me to work, standing over the fields of England as their protector.

We wanted to live forever.

So the Doctor made sure that we did.

Careful what you wish for. Tennant plays the Doctor again in four more one-hour specials -- five more hours of the best science fiction ever televised.

... that people who kill children are prone to other failings as well.

The Last Dancer copies should ship at Thanksgiving. Sorry, I've been on the road and swamped. But home again and catching up.

(Thought about calling this "thoughts from the road," but I ran across the "turn out" quote again, and I like it better ....)

Yes, more AI War coming. And another chunk of Last Five Exits, too.

It's been suggested that the way I'm categorizing these posts is useless to most people -- I can see that. I'm going to add more generic posts categories going forward:

Writing
Programming
Fiction (mine)
Fiction (not mine)
Movies/TV
Politics
Sports

Maybe a couple others. I suppose I could add one for Alan Rodgers as well, but most of that material's going on over to the Alan Rodgers Experience. There are probably another half dozen posts going up over there -- some video from my daughters, a complete copy of the dependency court document on the death of Anthony Rodgers and the abuse that infant suffered before he died, a few other things. And then that blog will be allowed to sit, unless something interesting happens that's worth commenting on. I've got even money on a murder-suicide somewhere down the road.

Amy Casil, a downright remarkable human being, has sent me half a dozen psychotic messages lately -- one of them bragging about how many friends she's got. I'm curious if any of them have children, and if so, how many of them would let the love of her life babysit, unsupervised....

I'd be lying if I said I wasn't going to miss George Bush at all. He's been great for comedy. This, 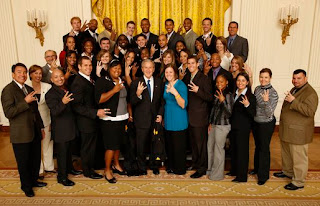 amazingly, is not photoshopped -- I got it directly off the White House website.
Posted by Daniel Keys Moran at 9:38 AM 13 comments: