I take particular pleasure in being able to make these two available again. FSAnd.com is offering them for sale in epub, mobi, html, and pdf formats. These were Matt's first two novels, and they're superb -- Jericho Moon, the sequel, is in particular one of my very favorite novels. 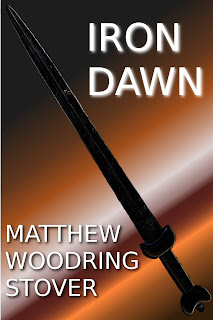 Iron Dawn
The Age of Heroes is over. The walls of Troy fell ten years ago, and the bright morning of civilization around the eastern Mediterranean is crumbling into adark age of war and savagery -- but for Barra the Pict, axe-wielding barbarian princess from the far-off land of Albion and her mercenary companions, war and savagery are business opportunities. When she and her friends make landfall in Tyre, the jewel of Phoenikia, the city is already under attack by ahidden enemy armed both with bright bronze and with black sorcery. For Barra, that adds up to silver.
Light? Dark? Who cares? She's the girl with the axe.
Jericho Moon 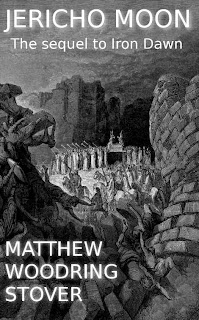 The kingdoms of Canaan are crumbling under a brutally relentless invasion. Now the last surviving Canaanite king has sent out a call for mercenaries to defend his capital, and where there's money to be made by spilling blood, Barra the Pict, gigantic Leucas of Athens and wily Kheperus, master of Egyptian magics, are sure to follow. Especially this city, built high upon an escarpment, with walls that dwarf those of fallen Jericho. And the invaders are only barbarians, after all, more a horde than an army. Easy money.
Or it would be . . . but the city is Jerusalem, and the invaders are the Israelites under the command of the invincible Joshua ben Nun, and the gods of Canaan have chosen Barra for their champion.
Angels, gods, blackest sorcery and shining courage take the field in one final battle for the fate of Canaan.
Winner take all.
Posted by Daniel Keys Moran at 12:38 PM No comments: 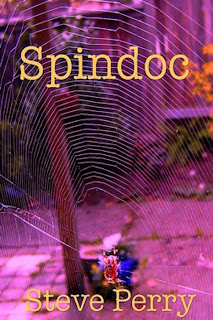 Two new books, one by Perry and one by Perry with Reaves, are available on fsand.com.
Spindoc: Venture Silk is a corporate spindoc in beautiful Hawaii, twisting the news to serve his bosses when his girlfriend is murdered. Silk is pulled into a web of intrigue beyond the kind he has learned to spin. Spies, rogue agents, and religious fanatics, all armed and dangerous, turn Silk's life into an adventure he never saw coming, and death lurks around every corner.
And... 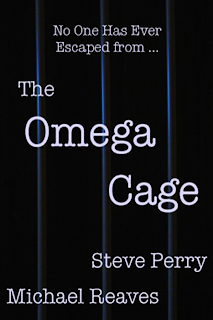 The Omega Cage: Set in the "Matador" Universe ... When Smuggler Dain Maro runs afoul of the criminal organization Black Sun, he is framed and convicted for murder, then shipped to the galaxy's worst prison. It's a one-way ticket to a hellhole planet -- nobody comes out alive, and nobody has ever escaped from The Omega Cage. Until now …
~~~~~
I'm extremely pleased to announce that two long-unavailable novels by Matt Stover are available now on fsand.com. Iron Dawn and Jericho Moon are two of my favorite novels, and if you've read anything by Matt, you'll understand that:
The Age of Heroes is over. The walls of Troy fell ten years ago, and the bright morning of civilization around the eastern Mediterranean is crumbling into a dark age of war and savagery -- but for Barra the Pict, axe-wielding barbarian princess from the far-off land of Albion and her mercenary companions, war and savagery are business opportunities. When she and her friends make landfall in Tyre, the jewel of Phoenikia, the city is already under attack by a hidden enemy armed both with bright bronze and with black sorcery. For Barra, that adds up to silver. Light? Dark? Who cares? She's the girl with the axe.
There'll be another post tomorrow when we do a co-promotion with Overworld.tv about these, but they're available now.
Iron Dawn
Jericho Moon
Posted by Daniel Keys Moran at 3:17 PM 5 comments: 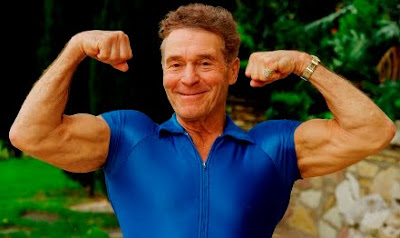 Apparently Rush Limbaugh mocked Jack LaLanne. For dying despite his vegetarianism. At 96 years of age.

There are very few great men in this world. But Jack was one. He plausibly added a million years of life, and many millions of years of better life, to the human race, by his presence on this planet. How many people lived longer or lived better because Jack LaLanne was there for decade after decade after decade, proving it could be done and encouraging them that THEY COULD DO IT.

I'm hardly ever shocked, but my God. Rush, listen to yourself.

MILLIONS OF YEARS OF HEALTHIER, HAPPIER LIFE ... for all of us ... because Jack LaLanne was a member of the human race.

Because Jack LaLanne was the best of us, the absolute best of what being human is, and walked the walk and told us that we could walk the walk, too, and made us not believe it, but KNOW IT. "Look," he said year after year, "here I am. Here's what I do. You do it too!" And people did, by the damn millions.

Jack LaLanne might have done more measurable good for the human race than any other human being of the twentieth century. Think about THAT.

I wasn't going to write about Jack LaLanne's death, despite having done jumping jacks with Jack when I was a boy, despite the fact that his presence in my life is one of the reasons I didn't have a heart attack at 44, like my father, why today at 48 I can run full court basketball for 2 straight hours. Folks, I bought the man's damn juicer (which was terrible) ... to this day when I exercise, I almost always hear Jack LaLanne's voice in my head. "One more!"

If you're a fan of Matt Stover's, go on over and take a look. It's early in its life, but they've already raised the money for a first run of graphic novels based on his "Caine" novels. (If you're not a fan of his, you should be -- the man's a hell of a writer.) I am less involved than the team page makes me appear, but I am involved as a consulting editor, and it's a worthy project.
Overworld.tv
Posted by Daniel Keys Moran at 9:03 PM 1 comment:

http://danielkeysmoran.blogspot.com/2009/07/convergence-or-device-i-want.html
In this post I talked about a variety of things I wanted in a convergent device. Today, this:
http://www.anandtech.com/show/4112/anand-goes-hands-on-with-motorolas-atrix-4g-webtop
Progress.
Posted by Daniel Keys Moran at 9:53 PM 5 comments: