A Freeway In My Back Yard 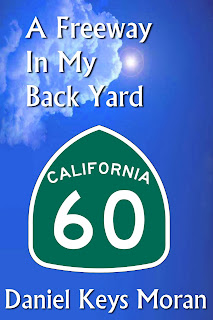 Now available at Amazon as well as FS&. My remaining novels -- the four Continuing Time books, Armageddon Blues, Terminal Freedom ... and then somewhere down the road, possibly even "The Ring" -- I'll post about here when they become available on Amazon. (Or in the case of "Armageddon Blues," Amazon and FS& pretty much simultaneously.)
I'm going to settle on either Lulu or CafePress this week for POD. I have zero expectation I'll make any money off POD, but I'm sure willing to be wrong.
If you've bought off FS& already, the update will be ready a little later today -- version 1.1, which includes epub & kindle for the first time. (Getting the screenplays to look OK in both those formats was difficult, but we got there.) You can, as always, download the new version for free.
~~~~~
If you were a fan of "Quantum Leap," go see "Source Code." Amy and I went to a matinee this morning, and while it mins some of the same territory as QL, it does so knowingly and gracefully and is a pretty little jewel of a movie. Scott Bakula's telephone-only cameo includes an "Oh, boy," just for people like us.
Posted by Daniel Keys Moran at 2:02 PM

Email ThisBlogThis!Share to TwitterShare to FacebookShare to Pinterest
Labels: A Freeway In My Back Yard

I know for myself and I am sure there are a good amount of people who will be purchasing the POD version as well as the e-versions. I guess we will see what happens when the numbers come back.

I saw Source Code a few weeks back. I thought it was a decent enough movie. I was not entirely convinced of the love story but it's a Hollywood movie so I don't know what I was expecting.

It helps to be a Quantum Leap fan.

It doesn't look like the updated version is up on fsand yet - the download is still listed as HTML and PDF post-login.

Huh. I uploaded it. I'll check on it tomorrow and see why it's not showing.

FYI, it still says "HTML and Zip" post-login, and the archive contents are the jpg, html and pdf only.

Are you going to be able to get an ePub version of Freeway?

I purchased it along with the other books from Amazon.com and Calibre wasn't able to convert it to ePub.