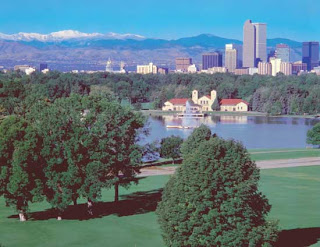 Having problems with my eye and couldn't risk the sudden depressurization of a plane, so I drove to Denver weekend before last, and drove back this last weekend. My days of taking really long drives are probably behind me -- in my 20s and even my 30s I could do drives like this, and did, without too much difficulty. I've driven 600,000 miles or so, by my best estimate -- I've driven through the Gulf Coast to Louisiana, through Mexico down to Guatemala, up and down the Pacific Coast too many times to count -- Canada, Washington, Oregon, California, Baja California....
I've driven to San Bernardino, 200 miles roundtrip, way too many damn times to count. My family's out there, unfortunately.
Probably not doing this again. At 44 years of age the strain was real. Knees locking up, back sore, neck sore -- and that was before I got to Denver. This was my first trip to Denver, and it turns out that Denver is Hell on Earth.
It wasn't the people -- hi, Cody -- or the work. I won't name the company for a variety of reasons including the fact that I consulted for them in a set of buildings that for good reasons lacked the company's name or any other identifying mark ... but the work was interesting and the people were first rate.
But I couldn't breathe.
Denver is (famously) the Mile High City, officially 5280 feet above sea level. I've been higher than that -- I've been up near the peak of Mount Baldy in California, which is 10,000 feet -- but I've never spent more than a day there. I've spent the night in Big Bear, California, a few times -- that's 6,752 feet above sea level. And I drove to Mexico City once, which is up around 7000 feet.
But the week in Denver was the longest time I'd ever spent at high altitude. I didn't notice it the first day particularly, but the first night I had trouble sleeping despite being exhausted -- put it off to "too tired to sleep," which is rare but has happened to me before. The second night I woke up several times, irritable, missing having Amy in the bed with me -- the third night I woke up four or five times and realized that I was simply short of breath. It didn't get any better until I drove home, through Denver, Utah, Nevada -- Las Vegas itself is 4,000 feet above sea level. Las Vegas has always made me feel jittery and nervous -- which surprised me, because big cities don't; I've been to a variety of big cities and I cope with them fine. I'm from Los Angeles. I always wondered if I had some judgemental "people having too much fun" thing going on -- a puritan streak I hadn't suspected.
Turns out it's not a latent puritan streak -- I realized as I was driving through Vegas that I was still short of breath....
Outside Las Vegas, in a fairly short stretch, the 15 drops from 4000 feet to 2000 feet. Maybe it was psychological, but I found myself able to take a good deep breath, and feel I was getting enough air, since the first night I'd become aware of being short of breath in Denver.
Got home Saturday morning, slept most of the day, and spent Saturday evening and all day Sunday enjoying the feeling of being fit enough to walk fifty feet without gasping for air.
Pretty much planning on retiring to Cabo San Lucas. My rare flashes of "top of a mountain would be good" just took a serious body blow.
~~~~~
It had to happen eventually. I've driven 600,000 miles, and every ticket I've ever gotten -- I'd guess I've gotten a dozen or so moving violations since I've been driving, about 1 for every 50K miles -- every ticket I ever had, I deserved. (More broadly, whenever I've interacted with cops, which is its own statistical universe, they've been righteous in their conduct -- didn't always agree with what I was being cited/arrested/detained for, but at least they were doing their jobs as they were supposed to.) So cops have always been fair with me ...
Until now.
Leaving Colorado hell on earth I was on cruise control on the two-lane 70 freeway, doing about 72 in a 75 zone. I wasn't looking for police -- I wasn't speeding. Traffic was booming by me (with Colorado plates, rather than my California plates) at 80 or 90 miles an hour, in the left-hand lane. It was dark and I was aware there was someone behind me following along at precisely my 72 mph, for miles and miles -- never bothered to check who it was: another responsible middle-aged guy like me, no doubt.
I came up on a guy doing about 65, got off cruise control, waited for half a dozen vehicles to go blasting by me at 80+, accelerated up to about 80 to get into the flow of traffic in the left hand lane, got around the guy doing 65, slowed down again, was reaching to set the cruise control -- and the guy who'd been following me hit the lights, turned on the bubble machine, and pulled my ass over. And wrote me for 87 mph.
I barely broke 80. That's not opinion; I was watching my spedometer. Half the known universe had blown by me while I tooled along at 72, this tool following me. But they had the right plates, and I didn't. I took my ticket ($77) and said thank you, without a hint of how I felt; getting into pissing contests with The Man is a young man's game, and I'm much too old for it. But I was ticked off for the next 500 miles.
Posted by Daniel Keys Moran at 11:48 AM

Email ThisBlogThis!Share to TwitterShare to FacebookShare to Pinterest
Labels: Colorado is Hell (apologies to Matt Groening)

Getting into pissing contests with the Man is everybody's game. YOUNG men get into FOOLISH pissing contests, however. Wisdom lies in figuring your input/output ratio. In the situation you were in, a very little piss would end up with a whole lot of shit (for you) and absolutely nothing whatsoever gained, as you were getting the ticket regardless.

I went to Boulder, CO, once, back when I was swimming a mile every day and could hold my breath for almost four minutes. Went to a lake where the Celestial Seasons Tea employees liked to bask, and for a swim.
A quarter mile into it, thought I was going to die. Truly. I couldn't understand it.

That lower oxy level is a killer if you aren't used to it. If you grew up in the hills, sea level, so I'm told, feels like walking through glue. If you grew up on the flats, a few thousand feet up gets passing strange.

My wife and I went camping once up a mountain, nearly a mile high. It was quiet, we were pretty much alone. We set up our tent, walked the -- big -- dogs, and tried to relax.

By dust, we both felt a sense of *wrongness* that was maybe half a step away from full-blown gibbering paranoia.

We looked at each other, simultaneously decided *some*thing bad was going down. We scrabbled around and packed up, then skedaddled down the hill.

Neither of us would have be suprised to hear later there had been a forest fire, escaped axe-murderers run amok, or that a big meteor had hit the campground.

"Into Thin Air," by Jon Krakauer, is one of the scariest books I've ever read. Anybody who does stuff like that is, far as I am concerned, barking mad.

The (Chinese, if I recall correctly) breathing technique that Steve Barnes has recommended, inhaling normally and forcing your exhalation to be prolonged and as complete as possible, works wonders for me when I am at high altitudes. I have had no trouble sleeping in Puebla Mexico, among other places. It puts me to sleep quickly.

I am a bit surprised about your comments about driving long distances. I am 19 years older than you and I still enjoy long drives, up to about 500 miles a day.

Breathing exercises didn't occur to me ... I'm going back to Denver, I'll give that a try.

Steve, I know exactly what you mean. Your body bitching that there's not enough air is downright disconcerting.

Bunnyman ... Yeah. Not saying we shouldn't fight the good fight. Just the 70 freeway in Colorado isn't the place ... ;)

I guess I'm just lucky. Fought asthma (allergen-related, but didn't know it at the time) for 3 years; Ever since I left that particular hell I have had no problems whatsoever breathing at any altitude. I've done the week's consulting in Denver twice, Helena once, and did a 100-mile bike ride around Lake Tahoe in a single day with only one day at altitude beforehand without more problems than you'd expect from a 100 bloody mile bike ride.

My natural breathing rate is two to three times slower than my wife's; maybe that and the asthma have prepared me well for altitude changes.

It's not just about oxygen; some of it has to do with personal physiology. When I swam in Boulder, I had a resting pulse rate of 56, was doing laps to equal a mile a day at the pool. But my hemoglobin ilked sea level.

Changes in altitude can sometimes cause problem even in trained athletes. Drop 99% of people on top of Mount Everest unprepared, they will keel over and die. Why climbers spend weeks staging at base camps to adjust.

Nearly all of the climbers carry oxygen bottles anyhow.

Even so, some of them will develop altitude sickness, (Acute Mountain Sickeness), sometimes pulmonary or cerebral (or both) edeman, throw a pulmonary embolus, and keel over.

Best treatment is to come down ASAP.

(And as I make it, one out of every twelve climbers who attempts the summit dies from something going up or down.)

Yes, it's five miles and not one, but the principle is the same.

Just as the old diver's psychosis "Rapture of the Deep" will get some folks and not others.

Pressure, or the lack of it, doesn't affect everybody the same way. Most people can adjust, and concentration on breathing, doing exercises, can help, but they won't work for everybody every time. Hyperoxygenation works fine while you are awake and concentrating on doing it, but when you stop, the effect lasts only a few minutes.

A good bet is to sleep at a lower altitude if you can. Find a little town down the mountain, stay there, climb back during the day.

Acclimatization to high altitude has a significant genetic component. Some people have an easy time of it, while others just can't easily deal when above sea level. These same as yet unidentified genetic components may also be a factor in how well the body regulates internal temperature when at high altitude. Genetic studies are on going, and work is fascinating to me.

PBS did a Nova episode on this a while back.
http://www.pbs.org/wgbh/nova/denali/core.html

Well, I would say, "Hey, next time you're going to be in Denver, let me know," but I suppose suffocation isn't exactly an incentive for coming back to our fair city. :/

Daniel -- pretty good chance I'm going back to Denver on business ... I'll mention it on the blog when I do. Anyone wants to catch dinner with me, would be a pleasure.

Sounds good. Denver's a pretty fair restaurant town, BTW; not L.A., I suppose, but we do have some good eats here.

Dan,
I've been remiss in checking the blog lately, but I just did, and saw that you've been in Denver. Was sorry to have missed you, I've been here since August 2002. I'll definitely be checking it more regularly. I do know some cool places to grab dinner here, so maybe we can get that done, and talk about fun geek stuff.