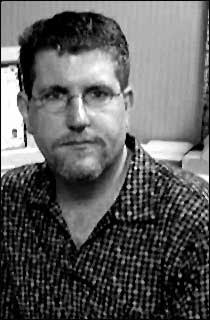 I mentioned JJ and I talking about an Iraq novel based on his experiences there -- I didn't think any of the pieces he'd sent me had ever been made public, but he said in the comments that two of them had. Here they are:

I get a call the other night. They've found four more bodies in western Baghdad. They're bound, hands and feet. They're blindfolded. They've been shot in the head. Their bodies bear wounds from beatings and electrical burns, and someone has used a drill on their flesh. That's just one phone call. I get a few more. Every night it seems, dozens of bodies turn up, both Shiite and Sunni, often killed in the same fashion.

The 'Hunters' of Afghanistan
by JJ Sutherland

NPR.org, July 7, 2006 · News out of Afghanistan is often overshadowed by the horrible stories of bloody conflict in Iraq. But Afghanistan is no party either, with armed terrorists hoping to take down the fledgling government and American troops still patrolling the country. But, unlike Iraq, Afghanistan is at least safe enough for a war zone reporter and producer to venture out among the people. As evidence, I relay to you this lovely epistle, sent from blogger #1 JJ Sutherland, currently in Afghanistan:

I spent today in Kabul's bird market. A 10-foot-wide packed dirt alley walled by two-story mud shacks. The first floor is the store. There are birds of every type and color. Canaries, finches, doves, fighting cocks, quail... the ones with the needle looking feathers... the ones that are the size of your thumb... the ones that I can't even describe, let alone know the name of.

Jeff Smith wrote me (nice letter Jeff, thank you) asking when I was going to put a donate button up on the blog. "When I get around to it" is the answer (possibly this weekend, but no promises) ... but if anyone is really dying to donate and can't wait, using the yahoo domain account danmoran909 will work ... and thank you to everyone who feels this way. Unless someone tells me not to I'll post the donations, who from and the amount, and donations will be fed back into literary-related expenses.

It's genuinely touching to me that people are still hanging onto this material after all these years.

Amy and I are going to a concert tonight but I'll try to get her to read the 1st half of AI War over the weekend, and will send it on to proofers once she does.
~~~~~
Almost forgot -- Jodi's agreed to let me post "Devlin's Razor." It's a really fun book about the Prophet Harry, referenced repeatedly, that she wrote 15+ years ago herself. That and "Terminal Freedom" should go up within the next few weeks -- gotta get them both out to proofers as well. Anyone to volunteer and actually proof will get a shot at the AI War proofing as well....
Posted by Daniel Keys Moran at 9:46 AM

I've been wanting to reread TF recently, so I'll proof it.

I've never read TF, so this is as good an opportunity to read and proof it as I'm likely to get. (Not to mention being hungry for the chance to read AI War when that's ready). And FWIW, Dan, I was the mystery anon from the gun control discussion a while back; hope you recognize the email now. It's nice to see you back in action, even though I've been in a bit of a silent period myself for the past couple years.

Erg. Letter-verification messed up the email address. The fix should be obvious.

I'll proofread "Devlin's Razor" if someone is still needed for that. I actually prefer proofreading things I've never read before. Just let me know how much you expect from a proofreader.

(I *knew* that liberal arts degree would come in handy someday.)

My best e-mail address for large files is domendur@earthlink.net.

I'd love the opportunity to read and proof the stories.

I'll proof! I'd be honored!

I'm very happy to find this blog and realize you're still alive. Or were, yesterday, at any rate.

EMERALD EYES is among my favorite SF novels ever. For reasons which will hopefully become obvious, you may enjoy reading the dedication to my own unpublished SF novel, ZAP FORCE:

Although I've always found it pretentious to write acknowledgements and dedications prior to actually getting a book deal, much less finishing the book, I may as well say up front that this book could not have been written without the previous work of a whole bunch of people I have never been privileged to meet: Stan Lee, Jack Kirby, Alan Moore, Steve Engelhart, Steve Gerber, Cary Bates, Mike Baron, Steve Rude, Frank Miller, Neil Gaiman, Robert A. Heinlein, John D. MacDonald, Lois McMaster Bujold, Barbara Hambly, David Brin, John Brunner, Robert R. Chase, Daniel Keys Moran and Stephen King.

I'm especially grateful to Stan & Jack for the FF and Scott&Jean, Alan Moore for The Last Days of Superman and the Best Days of Marvelman, Steve Engelhart for the Celestial Madonna and Sise-Neg, Steve Gerber for Bozos and Celestial Mind Control and Dr. Bong, Cary Bates for a truly amazing run on Superman and the Flash -- nobody has ever done it better, Mr. Bates -- Mike Baron and Steve Rude for Horatio & Sundra & Judah and all the rest, Frank Miller for undoing all the damage he did to my pal Matt with the beautiful Born Again novel, Neil Gaiman for Morpheus and Hob Gadling and the only time the Martian Manhunter has ever been cool, Robert A. Heinlein for pretty much everything he ever wrote but especially Thorby, John D. MacDonald for, of course, Travis & Meyer, Lois McMaster Bujold for Cordelia and Aral and Miles and even that idiot Ivan, Barbara Hambly for Sunwolf & Starhawk and Joanna & Antryg and John & Jenny, David Brin for Toshio & Gillian & Creideiki & Tom & Keepiru & Athaclena; John Brunner for everything he's written, as well, but especially for Nickie Haflinger; Robert R. Chase for the unbelievably cool Brother Benedict, Daniel Keys Moran for The Continuing Time, which has to be the best darned Silver Age Marvel Comic without pictures I've ever read, and last and certainly not least in that list, Stephen King, for Ben&Susan&Jimmy&Mark, for Jack&Wendy&Danny, for Larry&Harold&The Judge, for Johnny Smith, and Andy McGee, and Dennis&Arnie&Leah, and Andrew DuFresne, but especially for Carrie White, who made me wish I could burn down my own damn prom when I was in high school. Without that stuff, I would not be able to write at all, probably would never have enjoyed reading, and certainly would never have produced any of this stuff.

All of which was, obviously, directly inspired by your own dedication page from EMERALD EYES.

Can't tell you how pleased I am at the prospect that the Continuing Time may actually continue. I'm doing a blog post on how pleased I am at that prospect, over at my own page, The Miserable Annals of the Earth (miserableannalsoftheearth.blogspot.com). Drop by if you feel like it. I'd be honored.

Like Sean, I've been meaning to re-read TF, so I'd be happy to proof it. My head is quirky in the way that misspelled words and non-tracking grammar jumps out at me.

Email is jhill (at) tampabay.rr.com

I've been a decade-long lurker on the continuing-time mailing list and am a multi-purchaser of most of the special hardback editions you've published over the years.

Should have said... "... happy to proof anything related to your works..." or somesuch. I didn't mean to islolate my volunteerism to just TF. :)

Devlin's Razor sounds cool, and I'm all about proving my willingness to assist.

Hell yes I want some Cheesy Poofs.
I can proof TF and DR while I'm eating them.

I'd be happy to proof anything you send my way.

Hi Dan,
I've done quite a bit of proofreading in my time. I'd be thrilled to proof TF, Devlin's Razor or anything you or Jody have written.

You can reach me at teri@proofread.com